Back to Top
E-Newsletter
Poverty

One of the current political canards is to cry “class warfare” against those who point out our current economic realities, as if telling the truth about income and wealth in the U.S. has caused the ever-widening chasm between the very, very wealthy and all the rest of the population, especially the poor. Woe even more to those who connect the dots between race and poverty, race and income disparity, and race and wealth disparity. Does not mentioning it allow a form of “stealth class warfare” to continue unabated? The more-than-compelling economic data makes it very difficult not to point out the obvious—that American inequality continues to grow apace and that post-recession recovery seems only for the very rich. The inequality is found in looking at both income and wealth of Americans.

Household Income
The first view of economic well-being is to look at household income in the United States. The Census Bureau divides all U.S. households into five “quintiles” of equal size, based on household income. In June 2010, the Congressional Budget Office (CBO) took the census data and combined it with other income and tax information to look at after-tax income of U.S. households, including the top 1 percent. The result was the startling revelation that “the gaps between the richest 1 percent of Americans and the middle and poorest fifths of the country more than tripled between 1979 and 2007 (the period for which these data are available)…”1  In 2007, the top 1 percent’s share of all U.S. after-tax income reached its highest level (17.1 percent) since 1979, the first year of available data. The top fifth of households took home 52.5 percent of all income (17.1% by the top 1 percent and 35.4% by the rest of the top fifth of families), meaning that the income of the top fifth of families exceeded the combined income of all other U.S. families. The Center for Budget and Policy Priorities presented the picture this way: 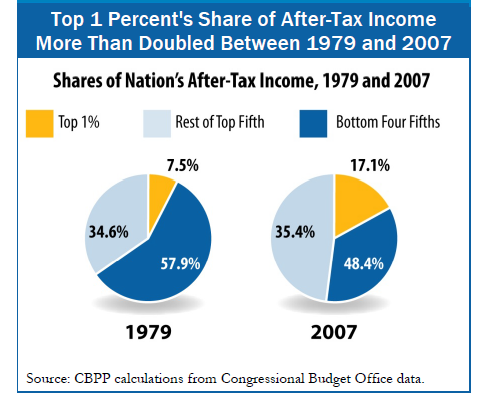 During this time, the income share of the middle fifth of U.S. households dropped to its lowest level (14.1 percent), and the share of the poorest fifth dropped from 6.8 percent to 4.9 percent.2 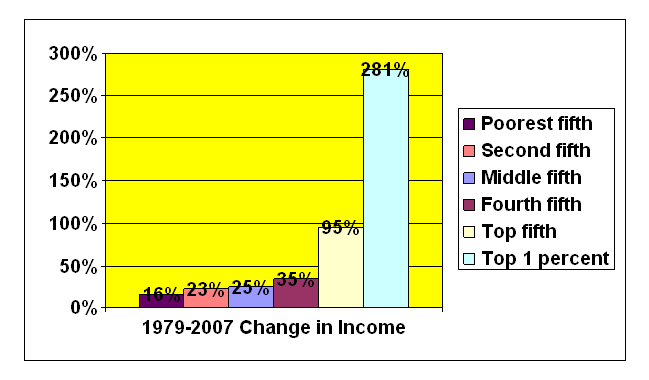 These changes in household income and the aggregation of more and more income over recent decades by the richest Americans were not “accidental.” They result from a variety of factors, including growing inequality in the distribution of all forms of market income (labor income, business income, capital income, capital gains, etc.) wage stagnation and executive pay hyper-inflation, wage and tax policies, anti-union policies, persistently high unemployment, overseas job losses, spending priorities of government at multiple levels, education and job training, trade deficits, and the operation of various markets.

One example would be the Bush-era tax cuts which still remain in force this year after Congress extended them in December 2010:

Because high-income households received by far the largest tax cuts—not only in dollar terms but also as a percentage of income—the tax cuts have increased the concentration of after-tax income at the top of the spectrum.3

Aggravating all of these inequalities is the fact that racial and ethnic disparities have widened even in the midst of the post-recession period. As reported by the Center for American Progress last month, “Poverty rates among African Americans and Hispanics, 27.4 and 26.6 percent respectively, are more than double that of whites, which is now 9.9 percent, up from 9.4 percent in 2009. African Americans and Hispanics also saw their incomes decline steeply from 2009 to 2010.”4  This adds the chronic impact of individual and structural racism to the host of factors driving income disparities in this country.

Household Wealth
The second way to think about “stealth class warfare” is to look at household wealth in the United States. The aggregation of wealth can be thought of as the accumulation of “income” (wages and salaries, interest, capital gains, rents, etc.) from all sources over time by one or more generations. Because of its accumulation, the inequities in wealth distribution are even more shocking than that of income mal-distribution. Since 1962, the top 1 percent of wealth holders consistently has increased its share of U.S. wealth from 33.4% in 1962 to 35.6% in 2009.5  The next richest 4 percent of households increased its share of U.S. wealth from 21.2% to 27.9%, meaning that the top 5 percent of U.S. households together hold more than half of U.S. wealth, as it has since 1962—but the share increased from 54.6% to 63.5% during this period. All together, the top 20 percent of U.S. households now hold 87.2% of U.S. wealth, up from 81% in 1962. The bottom 80% of wealth holders has consistently held less than 20% of all wealth, but this share had declined from 19.1% in 1962 to 12.8% in 2009. The chart below expresses these changes over the past half-century: 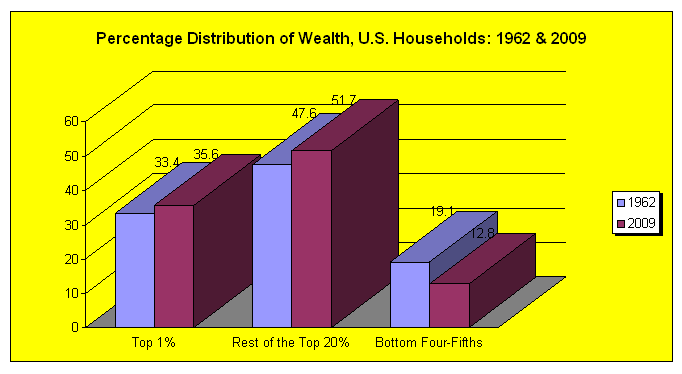 While average wealth declined 17.3% a year for the two years of the Great Recession between 2007 and 2009, "wealth declined substantially faster for the bottom four-fifths (-39.4%) than among the upper fifth (-27.4%), due to the fact that the wealth of the middle class is so heavily dependent on housing values, which stumbled deeply in these years.”6  Moreover, while white median wealth for all households fell substantially in the last two years to $94,100, it remains more than 44 times higher than black median wealth, which has now declined to $2,200.7

Conclusion
In their 1986 comprehensive pastoral letter Economic Justice for All, the U.S. Catholic bishops reviewed the data on wealth and income inequality in the United States at that time in light of two key moral norms: (1) the priority of meeting the basic needs of the poor and (2) the importance of increasing the level of participation by all members of society in the economic life of the nation. They concluded:

These norms establish a strong presumption against extreme inequality of income and wealth as long as there are poor, hungry, and homeless people in our midst. They also suggest that extreme inequalities are detrimental to the development of social solidarity and community. In view of these norms we find the disparities of income and wealth in the United States to be unacceptable. Justice requires that all members of our society work for economic, political, and social reforms that will decrease these inequities.8

The inequities that concerned the bishops more than twenty-five years ago have worsened dramatically. They result from, yes, that “stealth class warfare” which we dare not speak of, but which continues all around us today.

1. Arloc Sherman and Chad Stone, Income Gaps Between Very Rich and Everyone Else More Than Tripled in Last Three Decades, New Data Show, Center for Budget and Policy Priorities, June 25, 2010. As Sherman and Stone observe, these data are pre-Great Recession beginning in late 2007. The recession is likely to reduce the income gap in the short run, but experience is that that this narrowing of the gap will evaporate over a few years and its expansion will continue—unless major policy changes occur.